Hello everyone, and welcome to the next installment of the Ryder Cup-date! 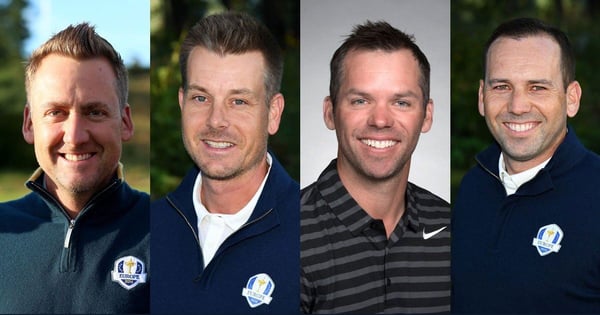 Yep. This is an actual picture of actual Phil Mickelson posted on his actual Twitter account, with the actual caption "PHEELING PATRIOTIC, PHEELING PHIERCE!". Team USA is gonna win by 10 points because of this photo.

The European team is now set, and there's no doubt Bjorn considered the rookies on his team when making his Captain's picks. Of the eight automatic qualifiers already on the team, five of them are Ryder Cup rookies (Tommy Fleetwood, Jon Rahm, Alex Noren, Tyrrell Hatton and Thorbjorn Olesen). Bjorn made sure to pick players with experience on Ryder Cup teams to fill out his roster, which is an interesting strategy.

It seems, however, that experience won out over consistency. Rafa Cabrera Bello was fighting for a Captain's Pick, and has been playing great golf this season, with five top 10 finishes. However, he has only one Ryder Cup appearance under his belt (2016).

Meanwhile, Sergio Garcia did not even qualify for the FedEx Cup Playoffs, ending up at no. 128 in the standings. Were it not for his five-year exemption from his 2017 Masters win, he would be losing his PGA Tour card.

Serg has appeared in eight Ryder Cups and won five of them. Bjorn said that not having Garcia on his team would be like "a football team going without a captain". Will Sergio be more of a liability than a leader? We'll have to see.

As for Team USA, absolutely nothing here was a surprise. Tiger and Phil have been locks for weeks. Bryson DeChambeau secured his spot with his second straight win last weekend, becoming only the second player in history to win the first two FedEx Cup events. It's a lot of pressure for a 24 year old Ryder Cup rookie, but he's having the best year of his career, and the best 3 month stretch of anyone in golf. He's sure to make waves at Le Golf National.

Captain Jim makes his final pick next Monday, and Tony Finau 100% deserves that spot. He finished second and fourth at the FedEx Cup Playoff events, respectively. He's got a hot hand right now. And, we know he's got guts and performs under pressure, given the whole ankle thing we already discussed.

As long as Finau plays well this weekend, he should be given the spot and acknowledged for his fantastic efforts this year. Of course, if Kuchar, Kisner, or Schauffele wins this weekend, we'll be in CHAOS MODE.

Do you have thoughts on the Captain's Picks? Can you sign your name backwards? Is Phil Mickelson's twitter the greatest thing since the invention of the internet? Let us know below!