*This blog will feature several video links, if you would like to laugh, please click on them all!*

Guys... golf is back. And in Phoenix, it is drunk.

The Waste Management Phoenix Open is a special kind of golf tournament in which everyone is drunk and the "quiet please" signs don't matter. Missed shots are excessively booed, pars are completely ignored, and close shots and birdies are celebrated like it's midnight on New Years. The 16th hole is just pure debauchery. It's awesome. All of it.

Here are two of my personal favorite non-golf related highlights:

Ahh. Good fun. And oh yeah there was golf played there too and Rickie Fowler won.

But: if "16th hole at WM Open" is on one side of the golf spectrum, "The Saudi International and Sergio Garcia" is on the complete other.

Sergio is a known hothead. But his display on Saturday at the Saudi International is so far beyond the spirit of golf that it makes your head hurt.

First, there was this:

Then, later on Saturday, Sergio reportedly damaged several greens - notably the 6th green - by dragging his shoe across them and leaving large divots. Strangely there is no footage of him doing this, but it was witnessed by several other players and officials, and he was disqualified from the event.

There's a lot to unpack here.

First, Sergio was paid an appearance fee just to play in the event. Reports say it was as high as $500,000. I tell you, If I'm being paid half a mil just to SHOW UP somewhere and play golf, I'm surely going to be on my best behavior.

Second, let's talk about how gross it is to destroy greens. Not only are you being a petulant baby and taking it out on the playing surface, you're messing it up for everyone who has to putt behind you, and the greens keepers who worked for weeks on the course and now have to come and clean up your mess. All because you are playing bad golf. It's like destroying your stove because you overcooked your grits. Hate the player, not the game.

Last, he reportedly will not be suspended for his actions. That's right. He gets to keep his appearance fee, accept his Sunday round DQ, and continue destroying golf courses near you. The last guy who did anything similar to this - he tapped down on a spike on the green, which is now legal to do - was fined $30,000 and suspended TWO MONTHS. For something that isn't against the rules anymore. This sort of conduct is unacceptable in golf and he should be punished for it beyond just a weekend disqualification. 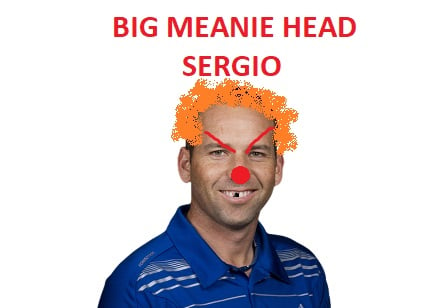 Credit: ESPN.com (MS Paint edits by Kim Hoy)
Should Sergio be suspended? Have you ever chugged two beers at 9:42am? Are mustard shots disgusting or delicious? Let us know below!