Founded 42 years ago by legendary golfer Chi Chi Rodriguez, the Chi Chi Rodriguez Youth Foundation partners with the city of Clearwater, Florida and the Pinellas County school system. It operates an 18-hole golf facility and the standalone Chi Chi Rodriguez driving range. All proceeds come back to the foundation, which also operates a public school for academically at-risk kids. Ninety kids attend that school every day on campus. The foundation is also part of the First Tee program of Clearwater, which impacts 2,000 kids a year through its programming in North Pinellas County, which is in the Tampa Bay region.

Since the range installed Power Tee this summer, management has found that the groundbreaking practice station system does a particularly great job engaging younger users. “Power Tee is something unique that you don't see every day,” says James Poulter, CEO of Chi Chi Rodriguez Youth Foundation. “It's not at every driving range. Kids love when the ball comes up on the tee and they can swing away at shot after shot from the same teeing position. It's fun and it's instant. In today's world, everybody's short on time. Power Tee offers instant gratification and speed of improvement, too. If you’ve got a basket of 100 golf balls, you're getting into the groove of your practice session more easily. It’s fun for people of any age.”

Al Arrigoni, the facility's director of golf, adds that kids are growing up in a society filled with automation. “It seems that everything's intuitive in their lives,” he says. “Everything's on some sort of device. So automation is inherent to what they do every day. Our older crowd has appreciated it, too. Once they get on it, they enjoy the ability to hit shots more consistently and easily. I have a bad back, so teeing it up with the Power Tee and the way you can program it to the same height by just hitting a button is great. I've also seen more technical golfers who can put down their alignment sticks, and they don't have to change that with every ball. It’s effective and efficient with Power Tee.”

Better players will also have a realistic and productive range session on a Power Tee mat, according to Arrigoni. “I really enjoy the Fiberbuilt mat that Power Tee's incorporated into the system,” he says. “It’s probably the best on the market. I typically enjoy hitting off the grass instead of mats, and the Fiberbuilt is as close as you can get to grass. We get that feedback from better players, too.”

The facility’s Power Tee stations lie beneath a canopy. Under the hot Florida sun, that helps keep them busy. And despite all of the rain, the facility stays open longer than most other ranges – which also helps boost usage. “We made a very conscious effort during Covid to stay open and help people have something to do,” says Poulter. “So, there was definitely an uptick in the industry and people's habits, with regards to people being more flexible with their time. At a driving range where they may only have 30 minutes to do something, we need to be ready to help with that. Power Tee helps speed up their time in hitting a bucket of balls. And we wanted to do something different moving forward to retain those customers, so that they’re still wanting to continue. Golf is a luxury item and one of the first things to get cut in a bad economy. So we’re trying to keep it higher on somebody's priority list.”

The facility’s intent is to use Power Tee to increase revenues, and that strategy's beginning to pay off. “There’s another standalone range relatively close by,” says Poulter. “But if golfers are choosing between the two and they've experienced Power Tee, they're going to want to come back here because of it. And when people use our facility, a portion of their bucket sale is coming back to help the kids.”

Power Tee is the world's premier automated teeing system and is currently installed and featured at 80% of the golf ranges in the U.K including St. Andrews, The Belfry, and Celtic Manor. Power Tee offices are in Jacksonville, FL, and Swindon, U.K., Power Tee is currently automating the bays in ranges in 18 countries, teeing up more than 6 million balls each day. 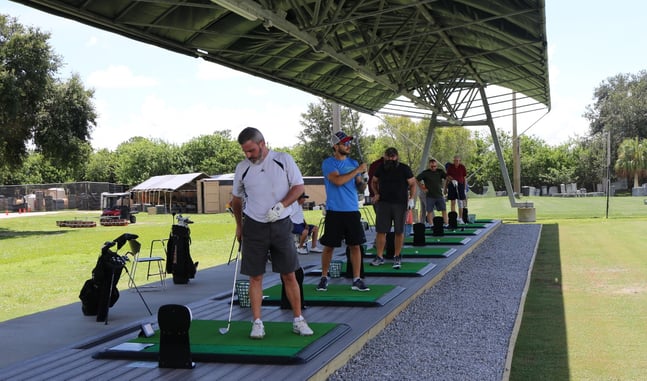