Did You Hear Tiger Won The Masters?

I'm pretty sure everyone on the Earth has heard that Tiger Woods won The Masters last weekend. In fact, I think the penguins at the North Pole are talking about it at this point.

Hah. We have fun here.

Anyway: Tiger's win is incredible on so many levels.

Very few athletes recover from a spinal fusion and return to play at a professional level, let alone a championship level. Very few athletes get listed on Forbes' list of "Most Disliked Athletes" and then 6 years later walk up to a roaring crowd chanting their name.

Yes, Tiger has dealt with more issues in his career than most athletes. Yes, a lot of those issues were self-inflicted.

But no matter the injuries to his body and his public image, no matter the physical, mental or emotional pain, Tiger summed it all up on Sunday: "You never give up. That's a given. You always fight. Giving up's never in the equation."

Think about this: when you saw this photo appear on the news in 2017, did you ever really think this guy would ever play golf again, let alone win a major and another green jacket? 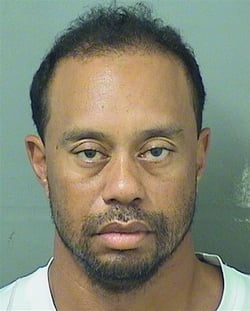 Tiger never gave up, and the fruit of his labor came to life on Sunday.

But, why was it that everyone, even other players, were rooting for Tiger?

I think what has drawn people back to him is the fact that lately he's shown he's human.

He's owned his mistakes instead of shying away from them, because we're human and everyone makes mistakes. Not everyone does it on such a public stage, however, but the fact that he's admitted it and made changes makes people relate to him.

And, he's not the stuffy don't-talk-to-me-I'm-above-you golfer he was before. He interacts with fans! He gives high fives! Hell, at THE PLAYERS he even shared a chuckle with a fan who was wearing his DUI mugshot on a t-shirt! Pre-scandal Tiger would have never done that.

It feels like he really realizes the opportunity he has now, both as a golfer and as a celebrity - and he realizes now that both can be taken away in an instant. So, instead of just playing his 72 holes and going home, now he's taking time to appreciate the people who support him, because it wasn't too long ago that nobody did.

His win at The Masters was the perfect cherry on top of a life and career rebirth, and it seems that the sky is the limit for both.

Now, will he catch Jack?!